All about the completion percent job type and retention/holdback

What is the completion percent invoice type?

We sometimes get users calling this commercial drawdown or architectural percent as well. In short it is a contract price job which will allows you to invoice your customer based on the cost categories in the estimate instead of simply breaking the contract price into lump/stage percents.

Note: depending on where you are, this concept may be called either retention or holdback. In this article, we'll refer to it as retention, but it is essentially the same thing.

Retention is most commonly seen on commercial projects and is the idea that the client holds back on paying a percent of the contract value until after the completion of the job. This is generally done to cover defects and any issues that arise within the first months/year of a project. The builder can invoice for these held amounts usually in percentage amounts at milestones. For example, 50% of the retention could be claimed back 6 months after completion, and a further 50% after a year. The terms/percents/timeframes of how exactly this works are very much based on the contract between the builder and client, but the principle is generally the same.

How to start a completion percent job

Completion percent invoicing and retention are set up at the point of converting an Estimate to a Job. When you select to run a completion percent job you are then presented with options (as below) to do with the retention if applicable.

When looking at whether variations are included in the retention amount the easiest way to think of it is as below, where all we do is consider the overall total. 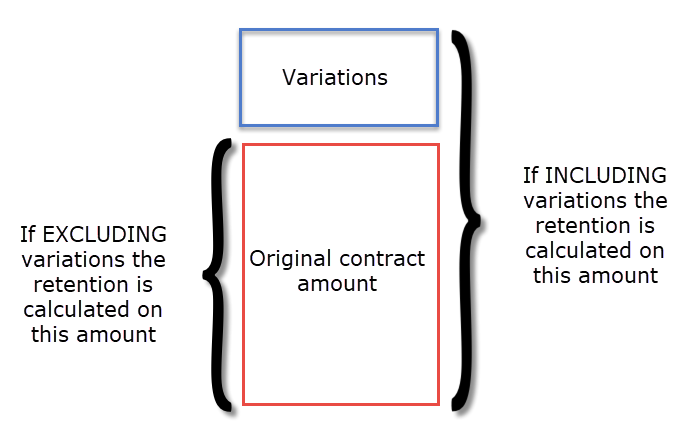 NOTE: if you select to exclude variations, the total retention amount we hold excludes variations, BUT individual variations in your invoices will still contribute to the overall retention being held.

See the video below for more information on how it works.