How does redistribution work?

What is the thinking behind the PC/PS/Allowance tables

These tables exist on the quote solely to inform your client of the amount allowed for an item for which the cost is not yet fully known. For example, you may have an appliance where the client is going to select their own and needs to know how much they can spend. The costs shown to your client within the PC/PS/Allowances table will always be EXCLUDING both markup and tax.

What options do I have for printing this table

The options here are quite simple, you're really just choosing whether we show the text in the red box in the image below, or not.

To toggle between having the text show or not, you'll be using the tickbox shown below, which is within the Content area of the Print Options screen 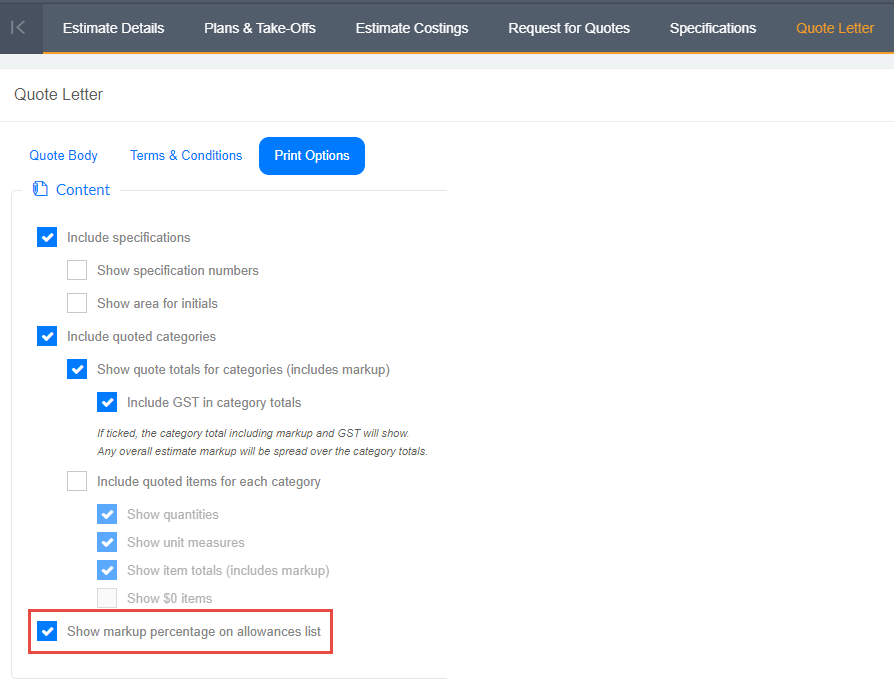 Option 1 - Show the amount of markup

If you have the option to show markup switched on, then your PC/PS/Allowances item table will show the amount of markup added to that item. The percentage we show considers the status of the redistribution buttons used also, so a C (rediistribute within Category) or an E (redistributewithin the whole Estimate) item will never indicate that markup is added whereas the markup percentage for N (don't redistribute markup for this item) items will include markup moved from other items also.

Below we've shown the estimate costings screen next to the printed PC/PS/Allowances table to try and illustrate this. The costs shown to your client will always be EXCLUDING both markup and tax.

If the concept of redistribution or N/C/E items is new to you, we suggest first starting with the below link

How does redistribution work?

This only difference with Option 2 is that there is no mention of markup at all on the PC/PS/Allowances tables. As a result, it's much simpler to explain.

Below we've shown the printed PC/PS/Allowances table for this option. The costs shown to your client will always be EXCLUDING both markup and tax.

Note for other items in your quote

Regardless of whether you choose to show markup or not within the PC/PS/Allowances table, items elsewhere in the quote will follow the redistribution rules to decide whether those costs include markup or not.